Adelphi are experts in Arabic website translation. We have translated websites into over 50 different languages often using 10 or more languages on a single website. We work on your HTML, PHP, ASP files, producing your website ready for publishing.

Below is a sample of an Arabic website translation, it was also translated into 7 other languages which included Cantonese (Traditional Chinese), French, German, Italian, Portuguese, Russian and Spanish. 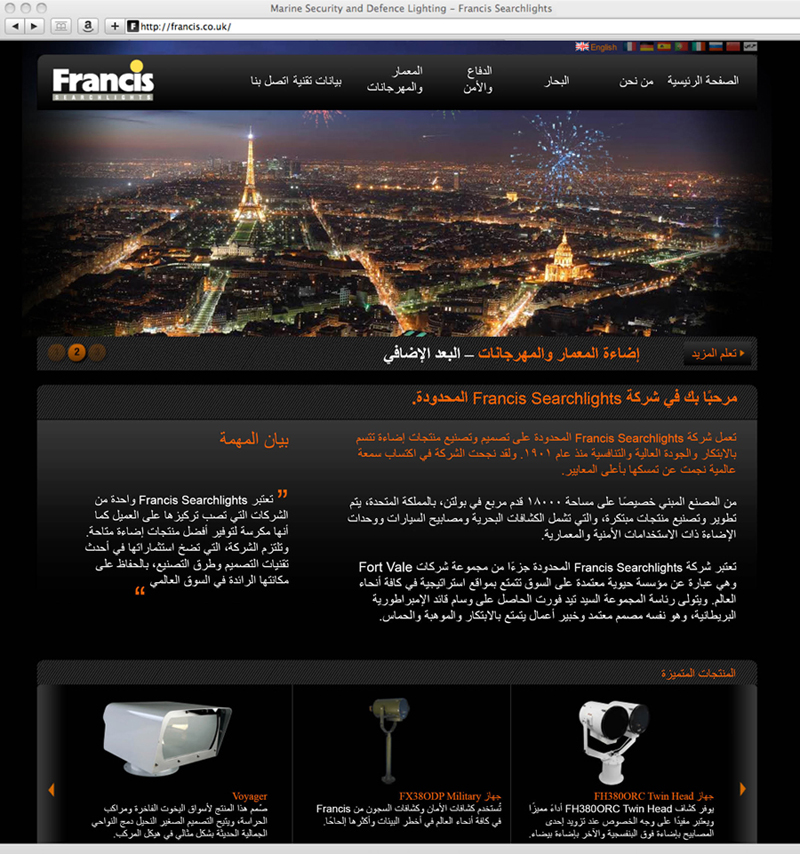 Translating your website into Arabic is a little more tricky than standard left to right languages. Arabic, Urdu, Dari, Farsi, Hebrew, and Kurdish are all right to left languages and this will mean some formatting of the layout will be required to make it work in the Arabic language.

Arabic website translation: How much of the site should be translated

Often it doesn’t make sense and it may be very expensive to translate the whole website into Arabic. If there are regularly updated sections such as ‘News’ or maybe a blog, in which new content is frequently added, it will make sense to exclude this from the Arabic translation. You can create an effective series of ‘mini-websites’ in Arabic which contains the main content of your website.

Arabic website translation: to flag or not to flag?

Many companies like to use flags to show the languages their website is translated into. Using a flag from an Arabic speaking country is only appropriate if your target audience is in that country. Arabic is spoken in many countries in the Middle-East and North Africa.

The modern written language (Modern Standard Arabic) is derived from Classical Arabic. Arabic can be spelled without vowels (common Spelling) أحب القراءة كثيرا‎ or with vowels أُحِبُّ ٱلْقِرَاءَةَ كَثِيرًا. Modern Standard Arabic is the standardised variety of Arabic used in everyday publications whereas Classic Arabic is used in the Quran as well as in numerous literary texts.

Adelphi can translate over 120 different languages. We also specialise in translating rare and difficult languages, which means we can provide one point of contact for any language enquiry.

Adelphi is a one-stop subtitling company that can cater for all your foreign language subtitling requirements, including subtitle translation direct from the video.

We have over 1,200 foreign language voice artists on our books in over 75 languages.