English to Greek Typesetting and Subtitles

Adelphi are professionals in producing both Greek translations and Greek print materials. All our Greek typesetting is produced in-house including brochures, packaging, business cards, posters and manuals.

Adelphi Translations Ltd. are experts in translating and producing English and Greek subtitles. Adelphi Translations Ltd have been producing Greek subtitles for corporate video for over ten years. Mention subtitles and most of us think of exotic foreign cinema or Hollywood blockbusters with foreign language subtitles but there is a huge need for foreign language and English subtitles on company promotional videos, e-learning video and instructional video either on the Internet or DVD.

Greek is a member of the Indo-European family of languages and is the only European language not to use the Latin alphabet. The Greek alphabet has been used to write the language for most of its 3,400 year history and has been the basis of both the Latin and Cyrillic alphabets. 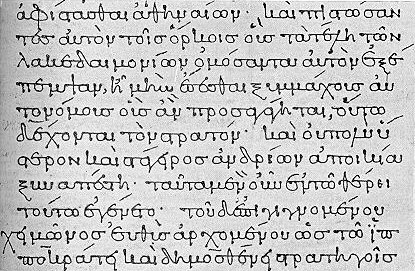 Sample of Ancient Greek with Diactritics

Ancient Greek had a complex range of diactritics but these were simplified in the spelling reforms of 1982 and now there are only two in common use. Greek typesetting represents no problem and the Greek alphabet is well represented in common font families.