We currently produce financial reports every month in Burmese (Myanmar).

Our DTP services include:

Clients often come to us with Burmese translations produced by another agency or freelance linguist. However, in many cases, the translator will not have used a font that is compatible with any typesetting software, making the translation unusable. In cases where the wrong font is used, the entire translation has to be rewritten using a professional font, thus incurring additional costs for you.

Thanks to Adelphi’s typesetting expertise, we understand that Burmese fonts are often incompatible with each other and cannot simply be swapped with other Burmese fonts. When we produce the Burmese translation, we make sure that it is translated using a professional font that works in typesetting software packages.

Adelphi works for companies and organisations such as Disney, Vidal Sassoon, and Jaguar Land Rover, to list a few. Plus international aid agencies such as Amnesty International, Refugee Action, UNICEF and the Refugee Council as well as many translation agencies and publishing companies all over the world. 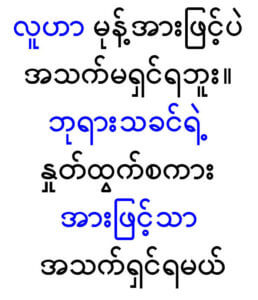 The Burmese or Myanmar script uses diacritics to represent sounds, these diacritics must be rendered correctly.

There is no fixed standard for programming new Burmese fonts, meaning many of them are incompatible with each other and major software applications. When typesetting Burmese is it important to use a font that works with the diacritics from the very beginning of the project, otherwise they will not be correctly aligned and text corruptions can result.