Our Portuguese DTP and typesetting services include: 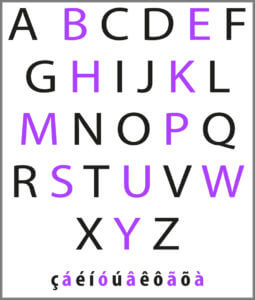 Up until recently, there were only 23 letters in the Portuguese alphabet (not including diacritics). The other 3 letters of the English alphabet were viewed as ‘foreign’ in Portuguese, but they were still used for certain ‘imported’ words such as ‘whiskey’ (they sometimes spell this more phonetically using their own alphabet: ‘uísque’). Since the 1990 orthographic agreement between Brazil and Portugal went into effect though the ‘w’, ‘k’, and ‘y’ are now officially included.