Our Czech DTP services include:

We work for companies and organisations such as Disney, Vidal Sassoon, Tesco and Jaguar Land Rover, to list a few. Plus international aid agencies such as Amnesty International, Refugee Action, UNICEF and the Refugee Council as well as many translation agencies and publishing companies all over the world. 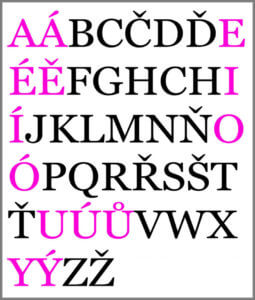 Czech has a system of having one grapheme (letter) for every phoneme (sound) in the language by adding accents to some of the letters. For Czech typesetting, the production software will not have any issues with these accents as long as the correct font is used.