Adelphi offers transcription, translation and subtitling of video materials in all major languages. We will provide the final video subtitled in the in the language, style and format that you desire, all ready for you to publish.

Adelphi Studio produces both the translations and subtitle files. We also input the subtitles into the video so it’s ready to publish in any format required.

As well as producing foreign language subtitles for video Adelphi Translations have been involved in many projects which required ‘same language captions’, which are basically subtitles intended as an aid to deaf or hard-of-hearing viewers.

There are two basic methods of producing foreign language subtitles. The subtitles can be ‘burned’ onto the video, which means they cannot be turned on or off and are always visible. They become part of the video file itself. Although using this method means that multiple languages cannot be selected using the same file it is possible to produce multiple versions of the video with different subtitles which can be selected by the user, for example by clicking on different links on a web page. For more sophisticated format such as DVD the format allows multiple channels of subtitles (and audio) to be created as separate streams on the disc. These can be switched on and off through the selection menu created in the authoring process. At Adelphi Translations we can re-author your DVD to include subtitles and foreign language audio tracks if you can provide us with the original video or the original DVD.

For DVD authoring the subtitle file is essentially a text file with timing information included. The screen shot below shows and example of such a file. In this particular subtitle format there is a subtitle number, followed by the start time of the line, a separator ( –> ) the end time of the line  and then, after a line-break, the lines themselves. This is the .srt format. 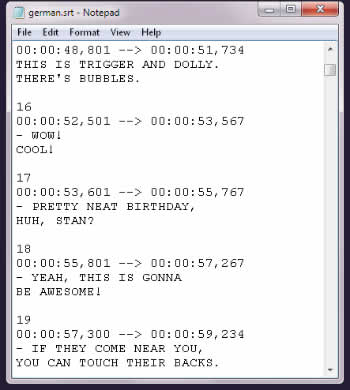 The process itself is not complicated but, unfortunately, there is a bewildering range of subtitle file formats which differ from each other in the way the text file is formatted. The differences may be small, such as the format of the time-code itself, or the use of line-breaks, tabs, spaces etc., to separate the individual subtitles, but it is important to know exactly which format of subtitle file your authoring tool will accept. 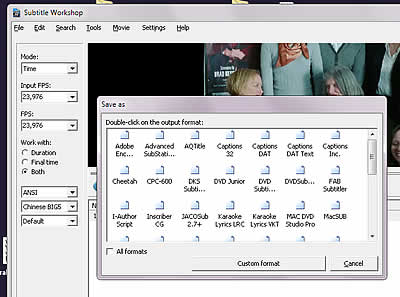 Just some of the dozens of foreign language subtitle file formats ….

The subtitles are produced using a variety of software. Some are better at handling right-to-left languages for Arabic, Dari, Farsi, Kurdish, Hebrew and Urdu subtitles, while others handle Unicode well, for subtitles in exotic scripts such as Thai, Tamil or Amharic. Whatever your requirement we can produce a subtitle file to suit your video and software. Russian and other Eastern European subtitles such as Bulgarian, Ukrainian and Belarusian use the Cyrillic alphabet. The main issue with these is the length of text when compared to the original English. Central European languages such as Polish, Czech, Slovak and Hungarian use an extended version of the Latin alphabet. Only Greek is the non-Latin alphabet in Western Europe. Subtitling is a straight-forward concept which can be a practical nightmare so why not let Adelphi Translations handle the project from transcription to translation and subtitle production?

We can work with any script

We specialise in both Latin and non-Latin languages, subtitle files in, for example, we can handle right to left languages such as Arabic and difficult to handle scripts, such as Hindi, Burmese and Thai.

Our transcription service provides industry-standard time-coded scripts of video and audio files ready for subtitling into the required language and in your chosen format (SRT, STL, webVTT, etc.).

Adapting to the client’s workflow

We can adapt to your workflow. Some clients want only the SRT file so that they can produce their own subtitles or closed captions, while others want us to provide the finished video with hard-coded subtitles.